Register With Us To Receive Brochure, Floor Plans & Price List

Amsterdam is the connected community you’re looking for, where you can enjoy shopping at Eglinton Square, hiking, biking, restaurants, cafés, or browsing the hundreds of shops and services on the Golden Mile, Amsterdam is close to it all.

Amsterdam Urban Towns is located at 1455 O’Connor Drive in Toronto. The condo has an excellent public transportation network. Residents of the condo have immediate access bus routes runs within the city. Warden Subway Station is within 6-minute drive. Also, with close access to Don Valley Parkway to connect to downtown Toronto and across GTA. In addition, surrounded by lifestyle amenities which provide dining, shopping, service and entertainment options. A family-friendly location that school, parks and recreational facilities are nearby. Residents of Amsterdam Urban Towns Towns are nearby beautiful natural green spaces, lush parks, and waterways to explore and escape from the busy lives.

Amsterdam Urban Towns will be a collection of 52 urban town units. Units will be a mix of two-bedroom layout and three-bedroom layout for selection. Units will range from 1,000 square feet to about 2,000 square feet. The home will feature private patios or rooftop terraces. If you would like to receive more information about this development, make sure to register with CondoTrend. 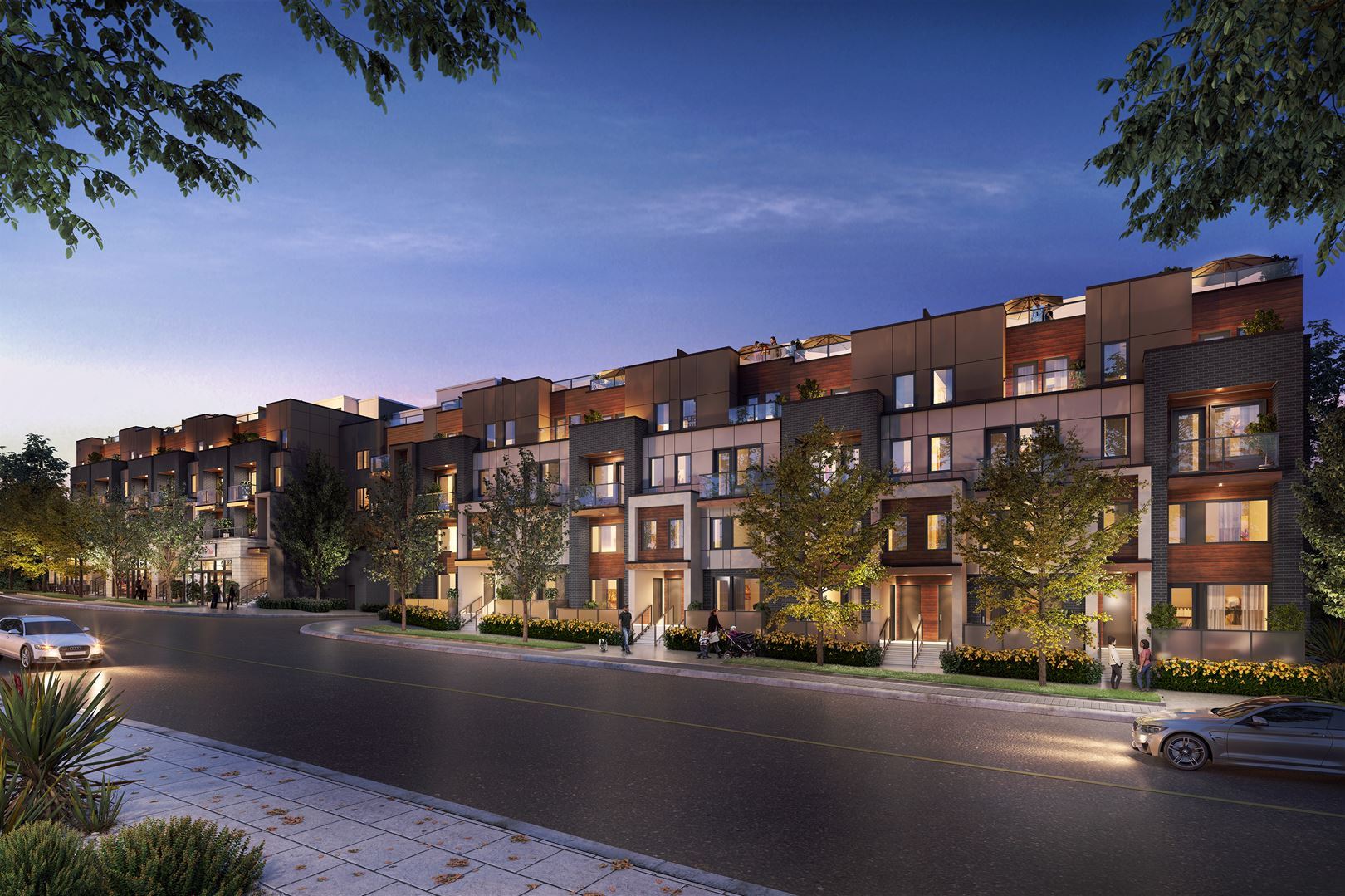 What’s good in the neighbourhood?

Amsterdam Urban Towns is located at the major city streets including St. Clair Ave. E. and Eglinton Ave. E. Residents will have easy access to the city’s Golden Mile neighbourhood with plenty of dining, shopping, and entertainment options to enjoy. Just 5-minute away from Hillcrest Mall, which has over 130 retailers and services for selection. In addition, Amsterdam Urban Towns is nearby major city attractions include the Aga Khan Museum, the Ontario Science Centre and Sky Zone Trampoline Park.

Amsterdam Urban Towns has a good transportation network. Residents are easily access bus routes just few steps away. Within 6-minue drive from Warden Subway Station, allowing riders to arrive Union Station in less than 50-mintue. Also, this is only minutes from the upcoming Eglinton Crosstown LRT which make the transportation more convenience in the future. Also, the location is connecting to The Don Valley Parkway, to stay connect to downtown Toronto and major employment hubs in less than 25-minute.

Amsterdam Urban Towns is located at a family-friendly location that school, parks and recreational facilities are nearby. Centennial College, Ashtonbee Campus is just easily accessible only 5-minute by car. Also, High Point Urban Towns is surround by many parks for outdoor activities and escape from the busy lives. The Don River runs nearby and the area offers plenty of parks, conservation areas, green space, and walking trails that everyone can enjoy.

Amsterdam Urban Towns will be a collection of 52 urban town units. Units will be a mix of two-bedroom layout and three-bedroom layout for selection. Units will range from 1,000 square feet to about 2,000 square feet. The home will feature private patios or rooftop terraces. The homes will be in stylish contemporary design with modern kitchens with beautiful finished and quartz countertops and ensuites with spa experience concept. Also, Amsterdam Urban Towns residents can enjoy a modern gym facility, party room and an outdoor playground for kids to play and explore.

Rise Developments is a new developer in the GTA. They are a dedicated homebuilder who is committed to creating the finest home for you and your family. Their purchasers can feel confident knowing they are making a sound investment in a home that will offer them design, functionality and endless enjoyment for years to come. Rise Developments is committed to creating homes of the finest quality for you and your family.